My old gliding page is here

Thermaling near the airflield today in our LS1 (VH-GWR) - as one does on crappy days - I pulled out my camera and took a little video. The clip is in my file-gallery in two resolutions. 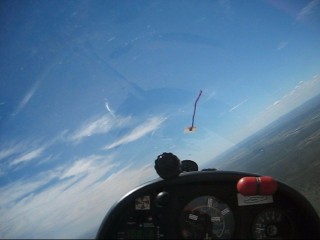 A clip of Andres landing followed by Peter launching in a discus-2.
mar16sml.mpg 25.82 Mb
The Discus-2 is worth about five times as much as WR.

This was an amazing day considering the time of year. We had eight single seaters flying cross-country and some landing around sunset. That isn't uncommon for summer but it is for mid autumn.
Our tail-skip was ripped of on a landing last week (not mine) and had to be re-attached before I could fly.

I didn't feel like a long flight and landed after a couple of hours. No-one was around to help me put WR away but some ants go busy cleaning the bugs off for me.

Last weekend was another good weekend considering the season. Yesterday I climbed to 10,000 feet QNH and cloud base was still a little higher. The wind was fairly strong up there, possibly around 40 knots.
It is also cold up there but hot on the ground. I was barefoot and just in shorts and t-shirt.
Above 8000' the canopy kept fogging up unless I left the vent open.
A cold airmass has moved in so it may be a while before we have good soaring weather again.

I downloaded a free program to retrieve the way points and track log from my GPS.
It is a little rough but very good value for the price. Their commercial versions look reasonably prices but I don't know they really do much that I want.
Anyway here are a couple of images from last Sunday's flight.

This shows the entire flight (over two hours) with the northern turn point at Clifton.
You can see the wind drift producing a cycloid pattern when I thermal. The wind is NW and my high point was at the end of the thermal spiral/cycloid SE of Alora.
I just cruised around after that to loose hight.

This a closeup of area near the airfield. The "18" is the launch point. We started on the grass strip on the right and I was towed west. At the end of the straight tow I release into a thermal and circled while drifting SE.

After using two thermal I headed north towards Clifton.

The track leaving at the far left was two hour later when I was letting down.

To the south of the field are lazy arcs where I'm just using up height. I then joined circuit downwind to the right and landed on the centre strip and stopping at the taxiway.

Quite a few gliding photos are in my flight gallery