Hi, I'm Eddie, This is my personal wiki 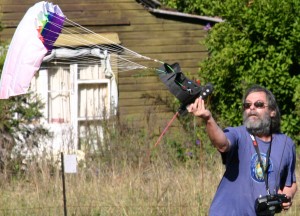 Most of my stuff in on http://nerdipedia.com

Working a little bit for CSIRO again. Not a real wage but it helps.

No up to much. CSIRO is broke and has an employment freeze.
I haven't done paying work since March 2013. I'm sort of retired but expect to do more work for CSIRO when they can afford me again.

I returned to QUT mid 2007 to be a part-time project manager for NTQO.
This is a non-operational robotic observatory built primarily for use by high-school students in the US.
Our (oz) students use an observatory in Chili.
A number of problems including the remoteness, internet access, staff and student turn-over and mostly funding have put this project on hold.

In the mean time we are working on building a smaller solar observatory on our building at QUT gardens point campus.
Not much see show yet but this is the view from the roof.

My other jobs there is as a technician for a high-power (as in lots of watts) engineering group.

You can email me at