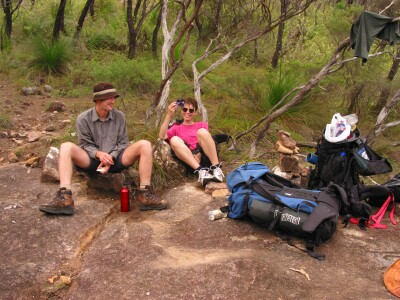 By backpacking I'm not talking about jet setting with a pack in the luggage compartment.
I'm talking about hiking for several days carrying everything with you.

I've done a fair bit of remote camping but 2002 on Hinchinbrook Island is the only time I've backpacked.

No shops, no cars, no accommodation, no plumbing, no power. If you're lucky you might find a toilet but don't count on it.
No phone, no lights no motor cars, Not a single luxury, Like Robinson Crusoe, As primitive as can be.

In other words like Gilligan's Island minus Mary-Ann and Ginger plus a few crocs.
We seem somewhat light on in the millionaire department as well.

A lot has changed in six years.

This page is about my preparations for this 2008 trip.

In 2002 I used a pump-up shellite stove. This worked fine but my current interest is in turbo-stoves.
Turbo stoves are gasifying stoves which usually burn solid fuel such as wood but can burn liquid if asked nicely.
Wood has a low energy density so it is not a suitable fuel if you have to carry your own.
The attraction of a turbo stove is it can burn just about anything including most of your rubbish including some plastics.
They are so much more efficient than an open fire that a simple meal can be cooked on a hand full of twigs.

I am working on a small unit especially for hiking. It will run for around 10 to 20 hours on 4 AA rechargeable NiMH batteries.

My tests showed that a mug of water can be boiled using under 25 grams of wood, paper or cardboard.
This means - two sheet of newspaper or a very small handful on twigs.

Vegetable oil is much more energy dense and a one gram tissue soaked with 7 grams of oil does the some job.

Last trip we pretty much took a guess at how much food to take. We got it pretty right expect we thought we had too much and deliberately ate a lot to get the pack weight down. We then had it about right expect we had no reserve and had an injury which delayed us a day and we ran out of food at the end.

Next time my food strategy is based on taking around 10 mega-joules of food per day. This amounts to about 500 to 750 gram of dry non-fatty food per day.

Food is similar to stove fuel in that we want something relatively energy dense to reduce the weight of the food we need to carry. Oils a fats are once again the clear winners when it comes to energy.
At the top of the list sits dripping and solidify oil - almost 40 MJ/Kg.
Next are oils such as olive oil - most are around 34 MJ/Kg.
The highest energy food I'd be prepared to eat in any significant quantity is Macadamia nut.
At around 31 MJ/Kg it even beats butter as a energy source.
Some other nuts such as pecan and brazil are not to far below this.

Normally I aim for a low fat diet but when I have to carry a pack the rules change. I don't have a cholesterol problem and a high fat diet for a week won't hurt me, especially with the exercise of walking.


Redundancy and Multi use.

It is nice to have spare parts but obviously you don't want to double up on everything. Usually we walk as a group so it make some sense to have compatible gear. For example having several (say) gas stoves of the same make in the group. If one breaks the working stove(s) can be shared and all the gas canisters will fit.
If two break in different ways it may be possible to cannibalise one to fix the other.

Some important light things are worth doubling up on - glasses, matches and lighters for example.
Another example could be taking spare batteries.

Batteries are also and example of multi-use. I have gone out of my way to standardize on AA batteries as my power source. I bought a camera which takes AAs. I made a turbo-stove powered by AA and made an emergency phone charger based on the same.

Using a multi-fuel (usually solid) turbo stove make other things double as fuel. Empty paper and cardboard packages can be burned. So can polythene bottles (PET smokes). Almost anything dry and organic will burn.
It can also make charcoal.
Charcoal can be use for many things including filter and treatment for some types on poisoning.

Cooking oil doubles as a food and a fuel.

A recycled bottle can become a water bottle, a candle lantern, a bin or a fire starter.
An old tea-shirt can become a rag, a matt, cut into strips for tying stuff etc etc.

There is often rubbish lying around. In the case of Hinchinbrook there were lots of things washed up on the beach. Bottles, shoes, thongs etc are all potentially useful if you are creative enough. Many camp-sites had tables seats and hammocks improvised from driftwood and flotsam.